Student at University of Lille

The Label Contractor project comes to solve this problem by offering several ways to reduce the length of labels (hence its name).

will return ‘MrgdSprClsss’ by suppressing all vowels from the label.

In this blog post, I will explain how you can apply a reduction following different strategies and how you can combine them.

How to install the project

In order to install this project, on a Pharo 9.0/Moose Suite 9.0 image execute the following script in the Playground:

The full project including examples of the application of LabelContractor on visualizations and Spec2 can be obtained with:

The idea was to build a tool that can reduce labels without losing too much information, and is to provide the user with a set of strategies, allowing him to apply them separately or in combination.

There are startegies for: removing some arbitrary substring from labels, removing all vowels, removing fully qualified path names, etc.

The contraction of labels is based on two decisions:

Currently these decisions are hardcoded in the contractor, but they will be implemented as normal strategies in the future.

There are 13 strategies that we are going to review now.

This strategy removes the extension of filenames. The extension is the part of the label after the last dot (‘.’)

This strategy abbreviates the words in the label to their first capital letter. As explained before, the label is assumed to follow the CamelCase convention. Only the first three words can be abbreviated (if there are more than three words). On top of that, the last word is not abbreviated.

will return ‘CMSAndInheritedTraitsHierarchyTest’ (only the first tree words Cly, Merged, and Superclasses were abbreviated).

This strategy removes all vowels from the label. Notice that the first letter of a word is always kept whether it is a vowel or a consonant.

Note: In English, the letter ‘y’ is sometimes considered a vowel and sometimes a consonant. This strategy assumes that ‘y’ is a consonnant when it is followed by a vowel like in ‘layer’.

This strategy replaces a word by another one. If the word appears more than once, then all occurrences of the word will be replaced.

There are three strategies based on specifically fixing a maximal size for the contracted label.

This strategy takes the first eight characters of a label. Again, the default size can be changed.

will return ‘ClyMerge’ (the first eight letters are kept)

This is another group of three strategies that remove some given substring from a label.

Notice that by default the startegies are not case sensitive.

This strategy accepts one or a collection of substring to be removed, and it removes all the occurrences of these substrings in the label.

An example with only one substring to remove:

An other example with a collection of substrings:

The same idea, this strategy removes the prefix of the label if it matches the given prefix: A collection of prefixes can be given if the same contractor is applied to several labels (with different prefixes).

This strategy is similar to the last one, except that it removes the suffix substrings.

This is a group of three strategies which is very similar to the Remove Substrings group, except that it removes words in the label (assuming a CamelCase convention). The words to remove are specified by their indexes.

Remove Any Words At

This strategy removes words of the label, that are specified by their indexes. Like Remove Any Substrings, you can give an index or a collection of indexes of the words to remove.

will return ‘ClySuperclassesAndInheritedTraitsHierarchyTest’ (the second word, ‘Merged’ was removed).

This strategy removes automatically the first word of the label, whatever it is.

This strategy removes automatically the last word of the label, whatever it is.

will return ‘ClMrgdS~rrchTst’ by applying first ‘ellipsisUpTo:’, then ‘removeVowels’, and then ‘removeSubstrings:’. Note that the last one was actually not applied because the other two had already changed the label, and the ellipsis is shorter than expected because ‘removeVowels’ came after.

To avoid unreasonable result (as in the previous example), the strategies have built-in priorities that can be applied with ‘usingPriorities’.

The same example but with priorities:

The result is different, because the substrings were removed before applying removeVowels strategy which was itself applied before ‘ellipsisUpTo:’.

The priority system is defined as follows (the color green means that the strategy has the highest priority): 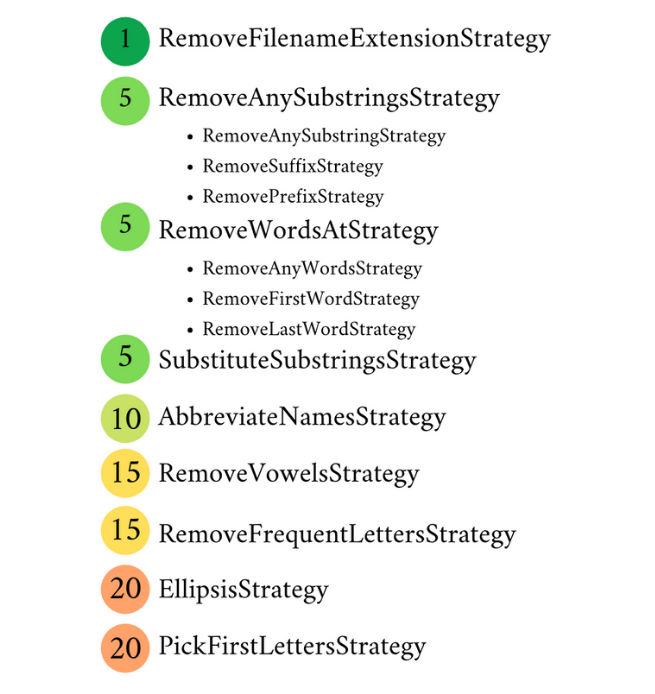 In this post, we have seen how to compact labels in a visualization using the LabelContractor. The goal is to improve the readability of a visualization while retaining as much information as possible.

Note that LabelContractor is not just for visualizations, but you can use it whenever you want.