TypeScript is a more and more popular programming language, and so it would be great if we could analyze TypeScript projects using Moose. At the time of writing, no meta-model (or importer) exists for the TypeScript language in Moose. First, what are the pieces of the puzzle needed to analyze TypeScript with Moose? Before we consider TypeScript, let’s look at how things work with Java:

VerveineJ is the importer that can generate models of Java files, allowing us to do analyses in Pharo/Moose.

If we want to do the same thing for TypeScript, we would need:

Creating a parser and importer for TypeScript is no small task, but TypeScript is a popular environment and we can use ts-morph to facilitate the navigation of the TypeScript AST. There’s also a very cool visualization of TypeScript ASTs, which will be useful for understanding and debugging.

Designing a new meta-model for TypeScript is definitely not trivial, because it requires a deep understanding of the language. On the other hand, once a meta-model exists, it’s easy to generate using FamixNG domain-specific language.

Pragmatically speaking, do we need a perfect model of TypeScript to analyze it?

“All models are wrong, but some are useful.” –maybe not George Box

By searching the web for TypeScript and Moose, I discovered a GitHub project called pascalerni/abap2famix. It is an ABAP importer (written in TypeScript) that models ABAP projects using FAMIX 3.0 (compatibility meta-model for Java). Java and ABAP are indeed different languages, but perhaps the differences are not so important if we want to do some static analysis? Seems like a pragmatic approach!

Looking at the node packages used by abap2famix I discovered famix, a TypeScript implementation of Famix, which facilitates creating FAMIX 3.0 entities from TypeScript. Its source is at pascalerni/famix, and I could see that much of it was generated, e.g., in class.ts there’s proof it was not written by hand:

How was this code generated? The answer is the fork of FameJava at pascalerni/FameJava, namely the Famix30Codegen.java file. The original FameJava was used to generate the Java API for use with FAMIX 3.0 metamodel. This fork generates (via Java) a TypeScript API. Clever and useful!

So, what if we try to create an importer using ts-morph and the famix packages that will model TypeScript programs in a Java metamodel? As a first try, model only the object-oriented elements of TypeScript, such as classes, methods, attributes, etc.

This is actually the project I proposed to students in an advanced-topics software design course at my university during the winter of 2021.

Several teams set out to achieve this goal, although none of the students had ever done parsing or Pharo before. Many were familiar with node and TypeScript.

I’m happy to say that they all were successful (in varying degrees) in writing an importer for TypeScript that allowed analyses to be done in Moose and Pharo, and their results are all on GitHub:

Here are some visualizations produced by Team 4 using Roassal on models loaded into Moose.

The first shows the Weighted Method Count (sum) for classes in several TypeScript projects. The cyclomatic complexity values were calculated using another npm package (ts-complex) in the TypeScript importer:

The following chart shows distributions of Cyclomatic Complexities of methods for various classes in the prisma project: 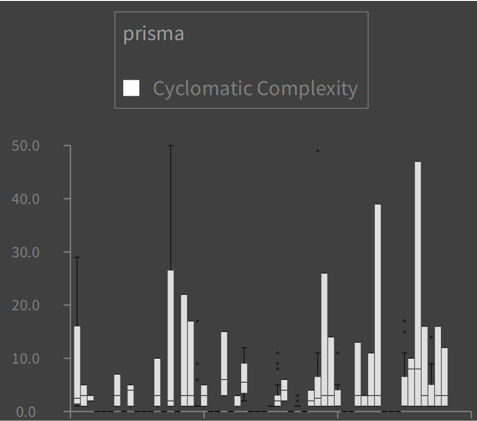 Limits of modeling TypeScript in a Java metamodel

Here are some of the obvious things in TypeScript (Javascript) that don’t quite fit into a Java model:

Even though a formal model in TypeScript doesn’t (yet) exist in Famix, it’s possible to perform useful analyses of TypeScript using the FAMIX 3.0 (Java) metamodel, thanks to packages, tools and APIs developed and reused in the npm and Moose communities.